Cope Plastics isn’t your typical machine shop. In fact, before it began to primarily manufacture CNC-machined plastic parts, 60 percent of the company’s business came from distributing plastic sheet and rod. The transition to manufacturing started to accelerate around 1998, just about the time the company acquired its first seat of Mastercam CAM software from CNC Software (Tolland, Connecticut). Since then, the company has grown through difficult economic conditions by increasing CAM programming and manufacturing efficiency to provide faster product turnaround times for its customers.

While its primary business has flipped from distribution to manufacturing, Cope is still the largest distributor of plastic sheet and rod in the Midwest, says Cindy Smalley, director of marketing and communications and part-owner of the family-held business. Today, the company houses 23 machine tools, including CNC mills, routers and lathes, at its Alton, Illinois headquarters. It has five more pieces of equipment at a small satellite operation in Hiawatha, Iowa. 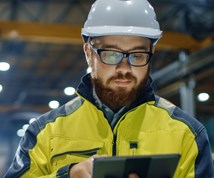 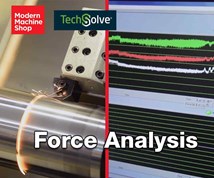 Video: What Can Force Analysis Tell You About Your Machining Process? 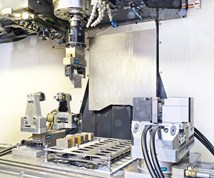 A Shop Where a Machine Loads Itself

Using these machines, Cope’s manufacturing capabilities are akin to those of a sophisticated machine shop—the only difference is that the chips flying are primarily engineered plastics rather than metal. Its customers are typically manufacturers of agricultural, construction, mining and oil-field equipment that want to replace metal parts with plastic alternatives that are lightweight, more affordable, and shatter-, wear- and corrosion-resistant.

Down Economy Forces Change
The economic downturn of 2009 changed everything. “People aren’t holding inventory like they used to,” explains Jerry Dunnagan, director of manufacturing. “Everyone wants the shorter-run jobs, and they want it now. Because they don’t have the inventory, we feel the pressure to turn things around quickly. It used to be everyone was happy with a 3-, 4- or 5-week lead time, but that is a thing of the past. Now, they want it in a week or two,” he says.

As the company stretched itself to maintain—and even reduce—lead times without sacrificing quality, something else happened to place an additional burden on its equipment, operators and programmers: Sales began to take off.

Programming Takes on New Dimensions
To keep up with this newfound growth, the company began to rely heavily on the tools available in Mastercam to program and manufacture more efficiently, Mr. Dunnagan says. Programmers use Mastercam’s solids capabilities to transform SolidWorks and CATIA files into 3D CAM models, which are used to efficiently generate part programs. With six seats of the software and seven users who are proficient at using it, the company ensures that its programs and programmers operate as efficiently as possible.

The company has also developed a partnering relationship with QTE Manufacturing Solutions, its Mastercam reseller, to provide training and help brainstorm how the CAM software can be applied to improve productivity. “There are so many features in the software that we don’t actually know about, so we rely heavily on QTE to point us in the right direction about what we should be learning next,” says Jim Eiland, programming supervisor.

One of the things Cope has changed in the last couple of years is its increased use of Mastercam’s Solids package. Today, programmers don’t have to spend so much time drawing the part to get a better perspective of what it is and how to machine it. Instead, they use the WCS (work coordinate system) in the Solids package to rotate the part and examine it from the most advantageous perspectives.

“Instead of having to figure out drawings, this is like holding the part in your hand,” Mr. Eiland says. “Programming in solids also has a favorable impact on quality. When you have so many layers, you can’t always tell if what you have programmed is correct. However, by comparing the digital model to an STL file generated by the solids package, you know for sure that the individual layers and the whole part is correct,” he says.

Another significant step forward in terms of programming productivity has been realized with Mastercam Lathe, which makes it possible to use Mastercam’s standard three-axis mill tool paths with the lathe’s live tooling. When Mr. Eiland first started programming, the company bought a lathe with twin turrets—C and Y axes. “It could take me all day to write a program for that lathe by hand to produce parts that would take just a couple hours to machine,” he says. Now, he goes into the C axis, writes the program and posts it. The program does all the work. According to Mr. Eiland, this one capability has probably eliminated the need to hire an additional person to do multi-axis lathe programming.

Although improved CAM programming efficiency helped Cope during its time of growth, other significant company-wide changes were also deemed necessary to keep up with orders. For example, it changed its hours of operation to keep spindles running longer. The shop began running two 10-hour shifts Monday through Thursday, and two 12-hour shifts from Friday to Sunday. “We were almost running around the clock with four shifts,” Mr. Dunnagan says.

To maintain the highest possible levels of equipment utilization, Cope also performs preventive maintenance on the majority of its equipment, reserving service calls only for warranty issues. It also keeps a deep inventory of wear parts and a well-rounded maintenance staff that can perform tasks such as replacing spindles and ballscrews.

While instituting CAM programming improvements and changing hours of operation to improve spindle utilization have helped Cope turn projects quickly, the company still strives to improve its quality and consistency. Although the recent emphasis on standardization of CNC manufacturing strategies and programming has helped engineers and programmers find a good way to manufacture parts, it does not necessarily mean it’s the best solution.

So, the company assigned two additional staffers to the three-person programming department to examine its existing manufacturing processes and suggest creative way to improve upon those processes. The staffers are being trained in Mastercam to help them experiment with and implement their discoveries. Mr. Eiland reports that they have made many recommendations that have increased productivity by as much as 30 percent in just over a year.